Aescap Life Sciences is a fund for joint account, also known in Dutch as FGR (Fonds voor Gemene Rekening). The Fund is tax transparent meaning it does not pay corporate income tax. Stichting Aescap Life Sciences acts as the Legal Owner. The Legal Owner’s statutory purpose is to act as Legal Owner of the investments of the Fund and to protect the interests of the investors as required by law. IQEQ Financial Services B.V has been appointed to provide certain financial, accounting, administrative and other services to the Fund. This includes the calculation of the Net Asset Value of the Fund as well as the participant administration. Darwin Depositary Services B.V. (DDS) has been appointed as Depositary and has the task to safeguard the interests of the investors of the Fund. The Depositary has delegated the safekeeping (custody) of the relevant Fund Assets to Saxo Bank. 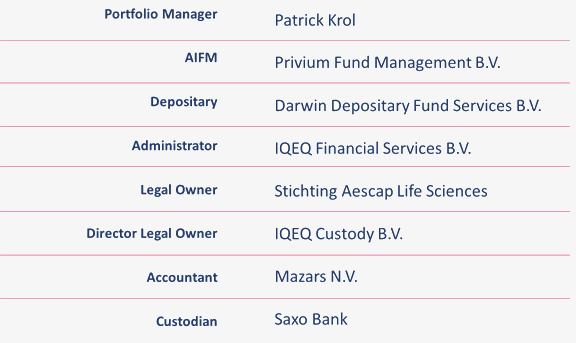 Peter Jan has more than 35 years of experience in investing. He has invested in different disciplines, in almost all asset classes, and in good and bad times. From 1979 – 1993 Peter Jan  worked at the Noro Group of Companies, then from 1993 – 2008 at both his own company TPR &amp; Partners and at W.P. Stewart & Co, thereafter from 2009 – 2013 at Oyens & Van Eeghen. Peter Jan is independent since 2014 and mainly active as an involved and dedicated investor.

Fred is the founder and managing director of Jonghoud BV, an investment firm in amongst others, equity of private and listed healthcare companies. As a pharmacist he built a chain of 40 pharmacies “De Vier Vijzels” which was later acquired by Alliance Unichem. He is also a founder of MediZorg, the former chairman of Sinensis Laboratoria and supervisory board member of Kadans and Kadans Science Partners. 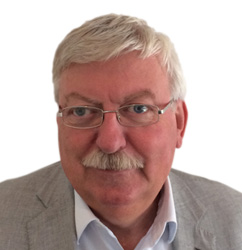